What are the best devices to connect to WiFi with?

There is no simple answer to this. However, we have included some guidelines below which might explain why you are getting higher speeds or better performance over WiFi on one device, when compared to others.

The WiFi capability of a device is dependent on the WiFi standard supported by the device. The latest Wi-Fi standard is 802.11ac. An iPhone 6S for example supports 802.11ac, whereas the older iPhone 4 does not, meaning the iPhone 6S will generally perform better when connected to WiFi.

Another factor which will influence performance is the ability of the device to utilise the 2.4GHz and 5GHz frequency bands. Think of these bands as two "highways". The 2.4Ghz highway is generally crowded, whereas the 5Ghz highway is typically less congested and it moves a lot quicker. 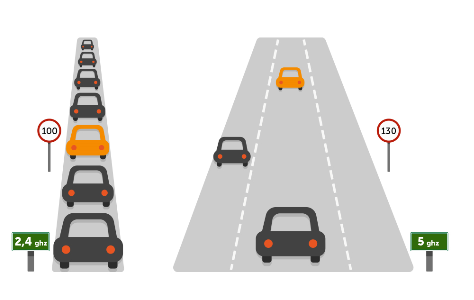 If you live in a busy area, like in an apartment block, you may have more frequent problems with your WiFi as a lot of your neighbours devices may be connected to the 2.4GHz frequency band. To reduce this Wi-Fi hustle and bustle, you should switch to the less crowded 5Ghz frequency band. However not all devices are capable of connecting to 5 GHz. The good news is that most devices sold today are capable of connecting to both frequencies, so the next time you are buying a shiny new smartphone, tablet or laptop its worth double checking that it does before handing over your hard earned money!

The Virgin Media Hub is an 802.11ac modem and it uses both 2.4Ghz and 5Ghz frequencies to give you the best Wi-Fi connection possible.

For more useful hints and tips on how to get the best out of your WiFi, pop over to our WiFi information page.

We have included some common device types below. Click on them to see the device spec.
iPhone 6S